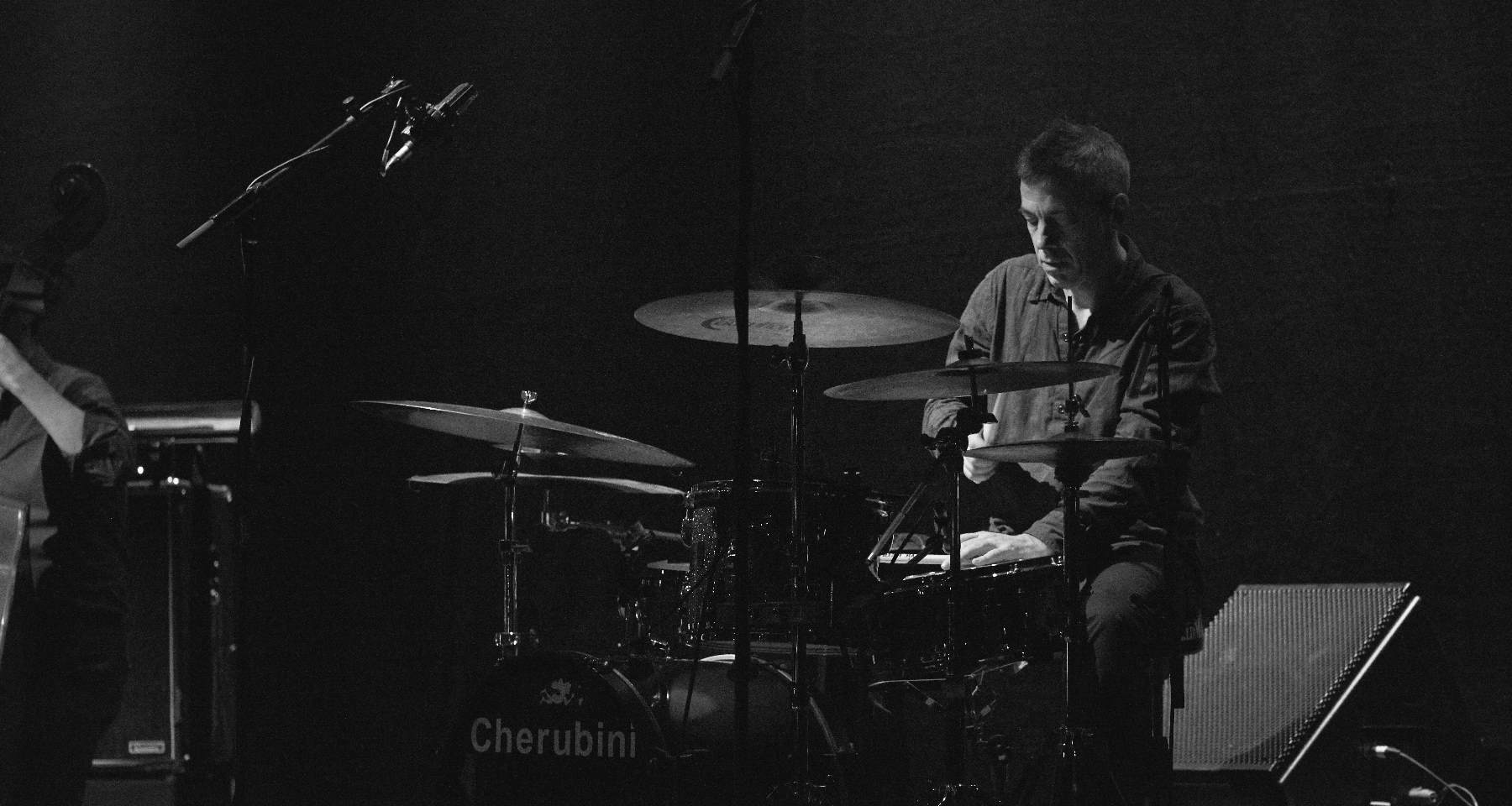 “ Leonardo Cesari offers a musical message that is build around Afro-Mediterranean roots that have since forever inspired the experimentation and the melodic perception of the jazz tradition. A path that Cesari has enriched with an abundant experience of collaborations with bands that pay extreme attention to the sound of the Mediterranean, such as la Piccola Banda Ikona and Klezroym.”Felice Liperi “ La Repubblica”

Leonardo Cesari is a drummer, composer, producer, and arranger was born July first 1961 in Rome, he majored in “Jazz” at “Licinio Refice” Conservatory in Frosinone. He started shaping himself artistically by a very young age at his father’s school, the legendary jazz pianist Umberto Cesari, with whom in the second half of the 60s, he had the possibility to partake in jam-sessions in his native house of Rome, which was at the time a usual destination for many famous Italian and foreign musicians.

This important formatting experience will bring him to be considered, starting the second half of the 80s, as one of the most appreciated drummers of the musical Roman scene. In 1986 he starts to collaborate with the famous Italian blues-man Roberto Ciotti, playing for him in his Italian summer tour of that year. In 1988 he becomes Sergio Cammariere’s drummer, with whom he collaborates with until the first few years of the 90s, playing in dozen of concerts and also in the tour of 1988 in Rio De Janeiro.  In that same year, he forms the electro-jazz quartet “NEWS”, with Stefano Sastro on the piano, Roberto Gallinelli on the electric bass, and Fabio Tullio on the sax soprano, with whom he will participate in the 1988 edition of the Festival dei due mondi di Spoleto.In the year 1990, together with Federico Zampaglione, he starts Tiromancino, and will stay in that band until 1995, playing in various concerts all over Italy, recording two Tiromancino discs for BMG Ariola, and Insisto for BMG Ricordi, participating in Luca Carboni’s tour of 1992 “Ci vuole un fisico bestiale”. Overmore, in those years he starts to compose music, signing the soundtrack of the theatrical show “Diario intimo di Sally Mara” with Manuela Mandracchia of R. Queneau. In 1996 he is one of the founding members of “Klezroym”, directed by Gabriele Coen, a band that becomes the most important formation of Italian Klezmer music, and also a well-known band on an international scheme, judged by Ari Davidoff in a special US classification on KlezmerShack, as one of the top ten groups of Klezmer music in the world. Leonardo’s growing experience and matured career in those years, and the rich and vast musical world he got to discover with the Klezroym ( an intense activity of concerts throughout Italy and Europe, five published albums for the CNI : “Klezroym” 1998, “Scenì” 2000, “Yankele nel ghetto” 2002, “Klezroym” 2003, “Venticinqueaprile” 2006, the realization of the soundtrack of Emanuele Crialese’s debuting movie “Once We Were Strangers” 1997, the theatrical experience of “Saccarina cinque al soldo” with Ascanio Celestini 2001, the three TV seasons of  the come in-house band “Dove osano le quaglie” transmission, from 2002 with Antonello Dose and Marco Presta, ) will bring him to produce a lot of experimental music on diverse scenes. He is Alex Britti’s drummer on his debuting album

“LA BEGUINE DU MAC" Cinevox Record, 1999, “Twist druma” Cinevox Record on first place classification HMV Giappone in 2002 for Rambling Records. "ROOTS AND BASS" di Mario Rivera, Cni, "GIORI" Amia- ta records, 2002, "SIGNORINA ESTIVA" feat. Asha puthli, Cinevox Re- cord, 2004, "SOLO TRIO" feat. Gabriele Coen, Riccardo Fassi, Cni, 2004. With those discs Leonardo experiments with new sounds related to the world of electronics and to the new scene of nu-jazz that in those years appeared in the European music scene, which brings him to collaborate with Andrea Guerra for the realization of the music for the movie " THE PROTAGONIST" by Luca Guadagnino, with Tilda Swinton, 1999, ” LE FATE IGNORANTI" by F. Ozpetek, with Stefano Accorsi, 2001. At the same time he collaborates with many artists, among which the producer Marco Rinalduzzi, Alex Baroni, Valeria Rossi, the M° Fabrizio de Rossi Re, the M° Paolo Pandolfo, the M° Leonardo De Angelis, Marcello Murru in his disc “Bonora” Cni. Leonardo starts an intensive activity of composition and arranging, signing soundtracks for dozens of documentaries edited by RAITRADE working for “Alle talde del Kilimangiaro”, Rai tre, “La storia siamo noi” di Giovanni Minoli, “La repubblica di S. Gennaro”, by Massimo Costa, 2003 " UN AMORE A VENEZIA" with Gedeon Burkhard, 2005, for "RAI QUATTRO" the fiction "GIOCHI SPORCHI" directed by David Emmer 2009, ”COSMO" di Gregorio Paolini, RAITRE 2011 "MI MANDA RAI TRE" RAITRE 2011 presented by Edoardo Camurri, just to cite a few. Meanwhile, his research into the multifaceted ethno-jazz world leads him to become the drummer of “Piccola banda ikona” by Stefano Saletti for 10 years, with whom he goes touring around the world in Spain, Portugal, Azzorre Islands, Canada and naturally Italy. He then became the director of the fortunate theatrical performance “L’Elasticone” with Marco Simeoli as a director.

In 2012 he starts a series of workshops and seminars; his goal is to share with the new generations his 30 years of study and experience. He has been teaching since 2015 at the prestigious Sonus Factory music school in Rome as a Jazz and Latino drum music performance teacher.

“If the ability of a musician would be measured based on the musician’s versatility, Leonardo Cesari would surely be considered as one of the most complete musicians of Italy.“Mario Melillo per “Jazzitalia”